skip to main | skip to sidebar

I thought I had written more entries in the last month - but maybe too busy!

I posted off all the blocks today. Lots of hard work to finish.

Well, I have posted off my Spring Fling Blocks.

What a way to begin my quilt!

I decided that being part of the challenge would be a good way for me to get into making the quilt - make a block for my quilt at the same time as making the blocks for the challenge.

I thought I had chosen blocks I would be able to complete in the time required - & I have - but the task was much more challenging than I thought it would be.

I have learnt a lot about foundation piecing. Not all foundation piecing is created equal, some are harder than others. The one I started on for instance - B6 Wild Goose Chase - should have left this 'til last, after I'd learnt a few tough lessons that involved more "unsewing" than sewing...

Anyway, I've begun. And it is challenging.

I am doing my quilt in brights and black.

I have completed 9 blocks of "Jane is a Bright Girl"

I will figure out how to do the whole name & number thing soon.

My blocks have arrived & the swaps should be sent back soon. It took exactly 1 week for them to arrive. Posted Monday, arrived Monday.

I have not done another block since - have cut out the papers but have been busy catching up on free block quilt.

It is coming along nicely. I should add some photos.

We are up to the 5th Row now & I have seen the completed quilt, which I like a lot. I think Daniel will like it too.

I have completed all except doing the final appliqué of the Chinese symbols. I want to do a couple of extras too.

I have been reading through the Michelle Hill William Morris book today - lovely work. Also like the look of an appliqué pattern April Quilters Companion - looks like it would be quite simple to complete quickly.

Haven't been writing in here enough. Will try & update more regularly because I forget what I have been doing with so long between.

Ended up doing a double happiness in the centre of the Chinese symbols row & have joined them together.

Have just started the practice block for the next row "Moon Gates" - it is a fast Cathedral Window style block. Quite nice.

Have decided to make a applique wreath from the Piece O Cake Aunt Millie's Garden patterns for the centre of a quilt, with my swap blocks around the outside. 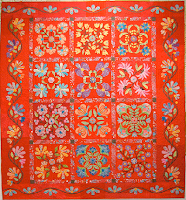 I think it will work quite well. I have begun the centre, but don't like the colour choices so will use that a s a cushion cover & start again. I made the stems too dark for the pastel flowers & berries.

I have also completed a few more blocks in the last couple of days: A11 Pebble's Protest, A12 Framed Fancy, M12 Hopscotch & M2 Duff's Bluff

Have begun the Sylvia's Bridal Sampler class every third Sunday with Veronica. It will be a challenge for her, but may take her mind off work problems. It is 130? 6" blocks made from the novel "The Master Quilter" - one of the Elm Creek series. 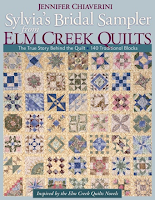 Veronica didn't make it to the first class, but I spent the rest of the day with her & got her machine going & cut up some fabric for her to begin. She is doing it with a yellow background. 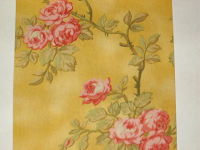 I am using a sort of yellow background - Robyn Pandolph "Sentimental Journey".  It will be a challenge for me because I don't usually use these type of fabrics.

I completed 3 blocks in the first class: A3 Bright Hopes, A9 Chinese Coin & E1 Nine Patch.

Have also cut out & fuse the appliqué pattern from the April Quilters Companion - still have to sew.

Finished another DJ block, Dogwood Days M1. A bit tougher than I thought, had to handsew a part of it. I suspect it could have been redrafted to make it easier.

Started my next row for the Oriental Sampler quilt.

Spent 4 hours with Veronica yesterday arvo starting her off with her first blocks for SBS. She completed 2 blocks & mostly completed another 2. Very tiring, I probably spent too much time there.


You can follow any responses to this entry through the RSS 2.0 feed. You can leave a response, or trackback from your own site.